The Kilteasheen Archaeological Project, jointly sponsored and funded by the Royal Irish Academy, Saint Louis University, and the Institute of Technology-Sligo consisted of a multi-phase research excavation that examined the Gaelic ecclesiastical complex at Kilteasheen, Knockvicar, Co Roscommon. The project began as an off-shoot of an initial ecclesiastical survey of the medieval parish churches of the Diocese of Elphin by Thomas Finan (generously funded by the Heritage Council). The results of that survey led to further geophysical surveying of Kilteasheen in 2004, which then led to the first season of excavations at the site in 2005. 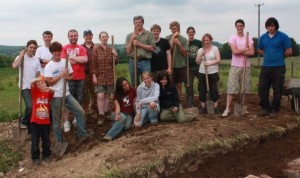 Excavations at the site, co-directed by Thomas Finan, PhD (Saint Louis University) and Christopher Read (IT-Sligo), yielded significant information about medieval ecclesiastical settlement in a Gaelic context. The site was mentioned in a number of historical sources, including the Annals of Connacht and the 14th Century Irish Ecclesiastical Valuations, but excavations revealed a much longer-term period of usage extending back to at least the seventh century in a Christian context, but also much earlier as evidenced by the extensive number of Neolithic and even Mesolithic stone tools discovered mixed within the medieval contexts. 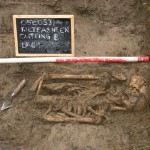 What had initially been described as the Bishop’s Seat (and presumably the church at the site) as early as the nineteenth century Ordnance Survey was identified as a thirteenth century hall house built by Tomas O’Conor in the 1250s. A platform to the south of the hall house was identified as a cemetery, likely associated with several sequences of churches at the site. Decorated stone was discovered at the highest levels of the cemetery (likely used as grave markers), and this stone has been dated to the late twelfth century and was part of an arch from the church at the site. Nearly 150 skeletons were excavated and examined. Ongoing research into the health and osteological data from those skeletons reveals that the humans were probably typical medieval peasants.